This Black Forest Trifle is definitely not a traditional trifle. It’s perfect for those who dislike traditional trifle (like my hubby). If not for the layers, I probably wouldn’t even call it a trifle since. This one is made up of fudgy chocolate brownie (instead of cake or Swiss roll), cheesecake mousse (instead of custard) and cherries with cherry coulis (instead of jelly and fruit).

I drizzled my chocolate brownie with some cherry liqueur for an extra cherry boozy element. This step is optional though. Add some toasted flaked almonds and adorn with fresh cherries and some grated chocolate and that’s it.

Even though there are multiple steps and elements to this Black Forest Trifle, they are all very simple and don’t take much time. Prepare them the day before and assemble on the day of serving to save time. You can also feel free to make individual portions instead of one large dish if you prefer.

If you need more festive recipe inspo, head over to my Christmas Recipes for some more delicious delights. 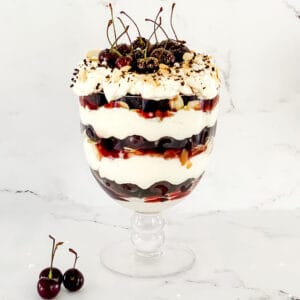 *The amount of tinned cherries you will need will depend on the size of your trifle dish. I used 2 tins. If making smaller individual versions you might want to halve the recipe. As a note of interest. I used a combination of fresh and tinned cherries. The reasons for this is convenience and cost. I saved the beautiful fresh cherries for the top and since the canned cherries are pitted, it leaves one less messy task to to. If using only fresh cherries, you will need around 1 (250ml) – 1½ (375ml) Cups of cherry juice for the coulis.
**Can be substituted with vanilla extract NOTE: If making the elements the day before assembly, ensure they are all covered/wrapped well and placed in the fridge until needed.
Tried this recipe?Post your pics and tag us at @my_homemade_kitchen_za or #myhomemadekitchen!
Keyword Black forest, Black forest trifle, Christmas, Christmas dessert, Dessert, Festive desserts, Trifle

This site uses Akismet to reduce spam. Learn how your comment data is processed.